“And God raised us up with Christ and seated us with him in the heavenly realms in Christ Jesus. ” Ephesians 2:6

In 2010, I had the privilege of painting murals in a small village in Cambodia. The tiny, rough shacks lining the dirt road comprised a community that was the most notorious brothel district in the world known for the trafficking of very young children. We painted inside a former brothel and a pedophile hotel that was now being re-purposed as a school, church, medical centre and housing for the vulnerable in the community.

Devastatingly,  many children in this community were victims. Some of their parents were even willing to sell them for a TV or a new wardrobe. You cannot imagine the feeling of singing, playing, and laughing with these little ones knowing that later that day, some would be sold to service a sex tourist. 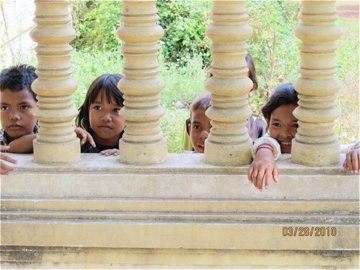 I’ve since heard many stories from survivors, both from abroad and North America, of their experience being trafficked. It is difficult to comprehend the enormity of damage that is inflicted on an individual who has experienced this degree of abuse and trauma. The amount and duration of healing that must occur, and the courage it takes such an individual to face such trauma, is immense. But this journey takes them from victim to victor.

Most of us have not had to face this level of trauma, but it is impossible to pass through life and not have some degree of trials. There may be days where we fall victim to the sin of another, where an unjust act will be dealt us, when we feel like the world is against us, or that the life we imagined is crumbling apart and not worth saving. Jesus tells us, “In this world you will have trouble. But take heart! I have overcome the world.” (John 16:33)

Like those who have been trafficked and are on their healing journey would prefer to not be called victims, so we too should not succumb to a victim mentality. We do well to remember that for those of us who have made peace with God through Jesus, the battle is already won. We are victors – present tense – not victims! And not only that, we have been raised up and seated in the heavenly places with Jesus! Though the battle is real and rages all around, we can rise above it and look down as spectators knowing God is for us and working all things for good.

And though you may not feel like a victor, understanding that you are is a game changer. You have access to God’s unlimited resources and help to face and fight any battle today. Sure, the enemy would like to ransack your heart and soul, and trample you to pieces (and you may feel as though you already are), but the truth is no matter what you have been through – or what you are facing right now – you are a victor. Jesus had the last say. And since He won, you do too!

So get up fellow sojourner! Remember who you are and whose you are. You are a child of God and a victor! You have been raised up and have all you need to take a step, however difficult, and even thrive for whatever purpose God has for you today, and the next, and the next!

May you see that you are a victor – an overcomer – in Christ!