It’s easy to grow fearful in times of uncertainty. It’s easy to lose hope as we suffer through lengthy hardships. Events such as the COVID-19 pandemic remind us how fragile our lives really are.

Like any trial, we often cannot see an end in sight and this one is no exception. When we are staying at home, social-distancing, viewing reports of daily escalating numbers, suffering through mandatory business closures and potential loss of livelihood, we worry we won’t manage.

My mum used to say of trials, “This too shall pass.” And it will. When it does, things won’t be the same. We will have a new framework out of which to operate. I imagine we will have a more thankful mindset, a greater appreciation for others as we joyfully reconnect and fully embrace our renewed freedom. Trials arrive unexpectedly and loom large, but we can move through them with grace, peace, and even joy.

END_OF_DOCUMENT_TOKEN_TO_BE_REPLACED

I no longer recognize myself. I’ve succumbed to wall washing.

About two weeks ago, I bought a two-pack of Magic Erasers. I thought I’d simply touch up a couple of high-traffic areas in our home, but once I began I soon realized two sponges would in no way suffice. Since Ralph was going on a Costco run for his quarantined mom and stepfather who had recently returned from Spain, I asked him to source some Magic Erasers. He valiantly returned home with two jumbo packs. I was in business!

Allow me a moment to explain how I came to this precipitous place.

For years, I prided myself by saying such things as, “An impeccable home is a sign of a wasted life.” If you’re one of those people, I’m afraid we cannot be besties. During the years we homeschooled, I sometimes bemoaned my girlfriends’ perfect homes. There wasn’t going to be that level of perfection around here. What with a Science project on the kitchen counter, an entire paper village dominating the kitchen floor, a homemade board game under construction (and its assorted pieces) littering the schoolroom floor, a tray of sand on the schoolroom table for letter formation practice, and books covering multiple surfaces (to mention a few examples), I was lucky to find an open area to dust.

Don’t worry, we didn’t exist in total squalor, but I did cling to the sentiment that had I spent my time cleaning ’til it was gleaming, I would have missed the point. We did clean as a family, all pitching in for regular maintenance such as vacuuming, mopping, dusting, and bathrooms, but I can assure you that I was not disposed to washing walls—or any manner of spring cleaning—until now. END_OF_DOCUMENT_TOKEN_TO_BE_REPLACED

People who are mad at God aren’t always truly mad at God – they’re angry at a person or system linked to God.

That system or person failed them in some way, and because it somehow represented God to them, they transfer ownership for the wrongdoing to God. Even though God didn’t deal the blow, He’s been made responsible for it.

Disillusioned, the wounded leave the faith and walk away from God, carrying deep pain and anger with them for years. What’s sad about this misrepresentation is they miss the true nature of God.

Religious systems and religious people are imperfect. They fail. They sin. The sin harms. The harm hurts. The hurt runs deep.

If you’re reading this and you’ve been hurt in this way, I want to say sorry on behalf of the people who caused you harm. But I also want to encourage you that they are not God. God is love and His love never fails (1 John 4:8; Psalm 136). Although you may feel you want no part of God if this is how He looks, don’t mistakenly bundle God’s infallible character with the flawed character or behaviour of human beings.

What they said or did, or failed to say or do, is no reflection of the true nature of God. I hazard a guess that God is deeply saddened when people leave Him on account of people. He understands this kind of pain and is likewise pained when His relationship with those who have been wounded is fragmented. He offers healing, counsel, direction, and the gifts of deep love, joy, and peace; being severed from Him doesn’t afford these pleasures.

Sometimes the anger toward God isn’t misplaced. Instead, the wounded one isn’t mistakenly blaming God but rather asking why God let it happen. As difficult as this is to absorb, we’re not often privy to these kinds of answers. Sometimes, we merely need to trust. That’s where faith comes in.

Can you believe in a God who doesn’t always tell you why? Who allows hurts this side of heaven? Who isn’t a divine Genie? Bad stuff happens to good and “bad” people alike. We aren’t living in heaven…yet. We just have to trust, even when it doesn’t make sense.

Trust in him at all times, you people; pour out your hearts to him, for God is our refuge. Psalm 62:8

“So let God work his will in you. Yell a loud no to the Devil and watch him scamper. Say a quiet yes to God and he’ll be there in no time…Get down on your knees before the Master; it’s the only way you’ll get on your feet.” James 4:8-10 (Message)

Let’s not make it about people, but about God. He’s trustworthy, perfect, and loves us unconditionally. Let Him heal your broken heart and bind up your wounds. (Psalm 147:3)

May you have the courage to trust God despite the wounding. 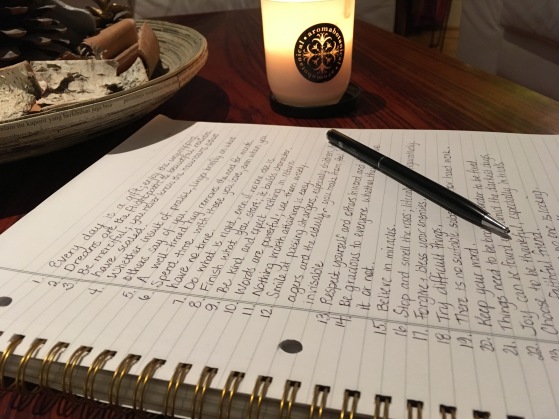 In the fall of 2014, I had an idea. I would make a list of important things I wanted my children to know. Being a serious list-maker in general, this idea posed a fun and interesting challenge. Before I knew it, the list grew to over thirty items. Then, each day I posted a thought for them until they were all used up.

This week I’m branching off slightly from my regular devotional to share my “Thirty-three Days of Thoughts” in hopes that it might inspire you and your loved ones as well. Enjoy!

And one more thought written as a blessing over you:

May you measure your worth not so much by who you or others say you are but rather by Whose you are!