I no longer recognize myself. I’ve succumbed to wall washing. 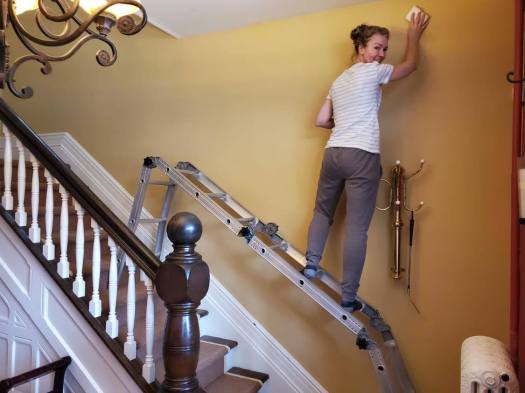 About two weeks ago, I bought a two-pack of Magic Erasers. I thought I’d simply touch up a couple of high-traffic areas in our home, but once I began I soon realized two sponges would in no way suffice. Since Ralph was going on a Costco run for his quarantined mom and stepfather who had recently returned from Spain, I asked him to source some Magic Erasers. He valiantly returned home with two jumbo packs. I was in business!

Allow me a moment to explain how I came to this precipitous place.

For years, I prided myself by saying such things as, “An impeccable home is a sign of a wasted life.” If you’re one of those people, I’m afraid we cannot be besties. During the years we homeschooled, I sometimes bemoaned my girlfriends’ perfect homes. There wasn’t going to be that level of perfection around here. What with a Science project on the kitchen counter, an entire paper village dominating the kitchen floor, a homemade board game under construction (and its assorted pieces) littering the schoolroom floor, a tray of sand on the schoolroom table for letter formation practice, and books covering multiple surfaces (to mention a few examples), I was lucky to find an open area to dust.

Don’t worry, we didn’t exist in total squalor, but I did cling to the sentiment that had I spent my time cleaning ’til it was gleaming, I would have missed the point. We did clean as a family, all pitching in for regular maintenance such as vacuuming, mopping, dusting, and bathrooms, but I can assure you that I was not disposed to washing walls—or any manner of spring cleaning—until now.

It all started about two weeks ago with an innocent can of paint. I was finally going to freshen up the basement. Last week, mission completed, I looked around the house bereft at all the other tired and neglected walls. Years of little people turned big (and their many friends) had left their marks. Part of me loathed to cover it all up. I’m strangely sentimental about such things, but this is a new stage for us—the one after the whole homeschool stage—and it was time to make things new. 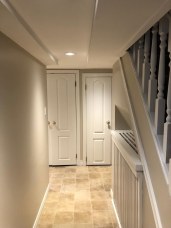 With the COVID-19 crisis and the need to stay home, I insightfully bought enough paint for not only the basement, but also a bathroom, the dining room ceiling, and an extra can to go over the trim work. I also desired to paint our upper stairwell, but quickly realized the improbability of such labor sans scaffolding or spidey-skills. Enter the Magic Erasers.

Once I began wiping, I learned the logic behind spring cleaning. More precisely, I realized that dusting walls is actually a thing. Who would have thought? I also realized just how magic Magic Erasers are!

It was me against the dirt, and the dirt was kicking my butt. I wiped, it smeared, it left cloud-like edge marks, it left my hands raw with wiping, and rinsing, and wringing, and mercilessly repeating. But I was determined. I worked like a ninja during overtime. I exceeded my own expectations and eventually… I won. Black scuff marks from dragged suitcases, gone. A plethora of smudgy fingerprints, not to mention dust, erased. And now you understand why it required a year’s supply of Magic Erasers.

You can also understand how it is that I’ve become a stranger to myself. My reflection is that of a person I formerly could not have associated with. Those “clean freaks” triggered me for my lack of domestic perfection. Now I’ve become one, sipping my tea and smiling over the steam at my pristine walls and gleaming baseboards, sauntering around the house with a Magic Eraser in my back pocket for touch-ups.

You can pray for me. I’m not sure how long this will last. Maybe only as long as this whole “stay home” effort. I’m not a maintainer by nature so I’m sure this too, like the coronavirus, will pass, but prayers are always appreciated.

I guess that leads me to this. If our home requires this much maintenance, how much more TLC does my heart require, my very life? If neglected or ignored, will the cobwebs, the dirt, and the stains go away? I hazard a guess that there aren’t enough Magic Erasers in the world to accomplish the task.

We need Jesus to make us new. All the dirty fingerprints, the black scuff marks, the worn and tired areas of our lives can not be blotted out without him. Jesus is our Magic Eraser. His death took away all our dirt and shame. We don’t need to work for it; we just need to receive it. His cleansing requires only a gentle, quiet act of faith—a whispered prayer to receive him, to be made new.

“Come now, let us reason together, says the Lord: though your sins are like scarlet, they shall be as white as snow; though they are red like crimson, they shall become like wool.” Isaiah 1:18